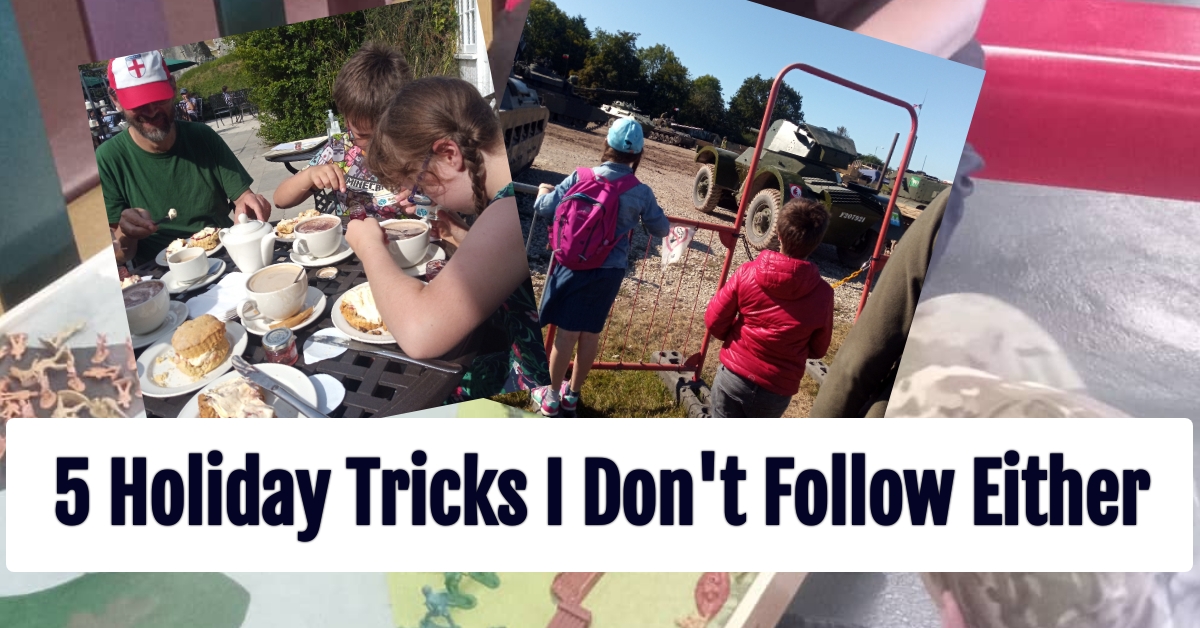 We’re on holiday this week. Dorset is gorgeous, with hilly parts as well as moorland parts reminding me of the Netherlands. Holidays are also the perfect time for meltdowns and extra moanings. Ever since the kids arrived home, now over eight years ago, it’s been like this on holidays. We decided to take them on holiday three months after they arrived. We decided on a static caravan in Wales. It was just one week, so how bad could it be?

It was pretty bad, to be honest, but we rolled with it, and when we got back home, the kids were so delighted to be safely home again, it made up for all the grumbles. We made a lovely photo book of that week, which they love looking at, chattering about that wonderful holiday… Not that any of them remember a single thing, and especially not the meltdowns.

Nearly a year later, we took all four on a holiday to Devon. It was still pretty rough, but better than the week in Wales had been. There was definitely some progress. So we decided that the more we did it, the better it would get. In theory. And to be honest, it is a lot better. For one thing, there are no nappy bags to carry around, no fold-up potties and no naps to add into the day. Some of the trauma-induced issues are still there, though, and to be honest, I find them harder to live with than eight years ago.

Simply because everything else is so much better and more manageable. It just feels annoying that the last 5% can’t be sorted out. How hard can it be to just go to a different church? How difficult is it to walk in a static caravan? Both are impossible, apparently. So here are 5 holiday tricks I have found that help us to have a smooth holiday experience. I don’t follow them all the time, because I’m stubborn that way, and I’m happy to go with the crazy rapids. My kids are reasonably happy too, and their meltdowns aren’t the long-lasting kind anymore. We’re talking about grumbling voices and scowling faces here, nothing some evening chocolate for me can’t solve.

Get food sorted out. My kids would happily travel to the ends of the earth if there were enough snacks to help them out. Especially if the snack boxes are the awkward impossible-to-clean type of boxes with a zillion compartments. It’s like a food treasure hunt, and they literally spend forever exploring the entire snack box and working on the order in which they will eat their food. There are lots of articles about chewy, crunchy foods, so that might be something to look into when deciding what you will put in their snack box. I try to avoid crumbly types of food or anything that gets them completely covered in sticky stuff.

When you arrive at your destination, the right kind of dinner can help with settling in. I try to avoid that French gourmet restaurant, just because we have arrived in France. My kids would do anything for what they call Yellow and Green Pasta, as in spinach and ricotta tortellini. It will complete their holidays, and nothing else will matter. Sleep in a hammock? Sure! Sleep on a mat on the ground? Why not, there’s yellow and green pasta, who cares how and where we sleep?

Rest. Having said all that about the pasta, sleeping arrangements are always interesting. When Mr P was little, he loved to sleep in our bed. One holiday we made the mistake of ordering a baby cot especially. I think he had exactly one nap in it. I did stick to the same bedtime routine; even now teeth are brushed in the same order as at home. (Girls first, then the boys. Little ones first, bigger ones start off, etc.).

At least one of my children loses all grounding when we’re away. It’s as if she has never seen us before in her life. So she’s stunned to find out we won’t allow dancing on the table, and even feet aren’t allowed on the table. Elbows on the table are the limit, really. So by making sure her teeth are done at the right time, in the right order, helps her to remember how life works. By letting bedtimes slip, she loses the plot even more, and the exception becomes a law of Medes and Persians that cannot be broken. They all seem to sleep better when life is at least a little bit predictable. It takes them longer to get to sleep, but it’s calming to have the same order in life.

When they were little, even their naptime was set in stone. We have an adorable picture of our little girl fast asleep in the Ikea bag on the beach. They might not want to sleep, or as was the case with my boys, do not let them nap whatever it takes, as they won’t sleep that night. But a quiet, restful activity can work just as well.

Pace yourself. I love holidays, and love to see and do as much as is possible in as short a time as possible. My husband complains he needs several weeks holiday once we’re back from one of my holidays. But I constrained myself somewhat when the kids were little, and even now we have several days where we don’t do very much. I love exploring the area, even weeks beforehand I have a list with all the stuff we could or should do.

I now console myself that maybe we’ll come back to this area one day. I have enough coming-back kind of holidays for the next century, I think. My kids love going places, although the boys feel it’s their duty to complain bitterly. Everything is declared boring, tiring and a waste of their time, which would be better spent watching television or doing Minecraft.

I pace myself, looking forward to once they are in bed, or that hot coffee first thing in the morning. Don’t rush your days, or do all the activities in one day. I found that more than one activity tends to rock the boat too much, usually leading to one or more meltdowns.

Recognise the kind of moaning. Over the years, I have found that their moanings are based on fear. Lack of control shows as complaining, as they have no idea what to expect. Struggling to imagine what it will be like has them running for their safety zone, trying to drag us all down into their bunker. I know the kind of stuff they like though, which is actually a lots of stuff. They love history, have a great imagination, love climbing stuff, like open spaces, like snacks… So any place with those things included will do.

This week we went to Corfe Castle, as I said. You should have heard the complaints! Their lives really weren’t worth living if we went to this boring old pile of stone. In the car, they changed their minds a little already, just enjoying the scenery and road signs. By the time we had parked up at Corfe Castle, three out of four were raring to go. One needs more time. Always. We walked the long path to the castle, one moaning all the way. We found a lovely tearoom where we would have Cream Tea on the way home. That brought the groaning to an end, but once he saw the kids’ archery set-up, his day suddenly turned perfect, with Corfe Castle declared the best castle in living history.

We had a few more grumbles as on the way back down he couldn’t use the right target straight away, but some kind guys did a competition with him, and he was chuffed.

I knew from the past eight years exactly how the day would pan out. So, me smiling in the car on the way back was really because I had been right all along, haha. Just kidding. I still get annoyed when they moan and shriek about boring days out. Just because I know they will actually love it once we get there, so why do I have to use up precious energy in smoothing things down? On the other hand, why do I even try to smooth things down?

Adjust your expectations. I find that harder for certain things than others might. This week, we tried the Evening Entertainment a couple of times. Not every night, obviously, but surely they should be able to cope with going to bed an hour later than normal? Nope. The entire next day was one big Meltdown City, doing my head in. But they loved the Entertainment, so I tried again after a day or so. Same result. After about four disastrous try-outs, I gave in. Evening Entertainment isn’t on our list anymore. The price was too high, the stress levels too unmanageable.

I do feel sad when we can’t do stuff ‘normal’ families can do. And it’s hard to accept when we have pushed our luck too much, like when we went to Tankfest. The entire day was fabulous until the tide turned in the last few minutes. We should have left at the height of the party. As a teacher, that is what we were always told to do. (Dutch schools are pretty wild and fun, but you must leave at the height of the party…). I then hover between pity for my children’s tiredness and inability to cope and feeling thoroughly irritated by the shrieks and catty voices.

So I look at holidays and all the fun we could have, and some things get knocked off the list. The price of fallouts isn’t worth it. Other things will be worth the meltdowns or moanings, whether before or after. I’m happy to deal with them, knowing it’s still a lovely memory for them, and they will have forgotten about the negative stuff by the time it’s breakfast again. I might feel that they have missed out a little, but seeing their smiling faces when chatting about the good stuff we did is worth lowering my own expectations.

How do you deal with holiday trouble? Aim for the calm, or ride out the storm? Do let me know, I love to read your comments!