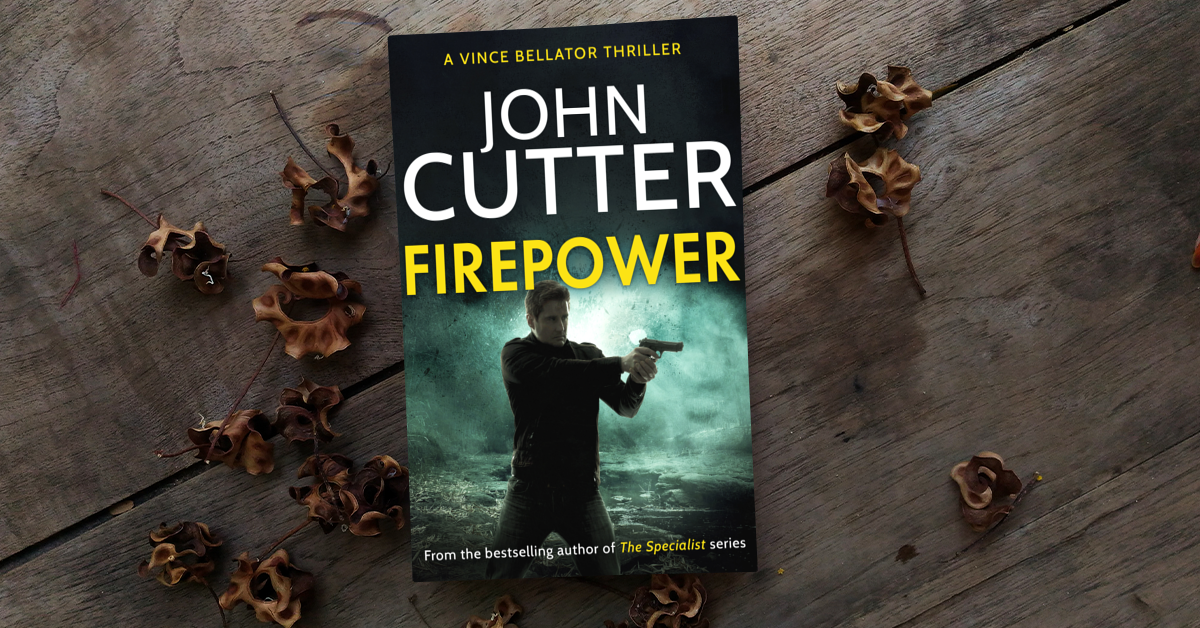 “Apparently these domestic terrorist cells are always making some ugly plan and usually nothing comes of it. That’s what Agent Chang said. So maybe the FBI’s not taking it all that seriously. But meanwhile – where’s Bobby?”

Firepower is a fast-paced race against a domestic terrorist group that call themselves The Brethren. The main character, Vince Bellator, former Special Services Operative, meets some of the brethren in the woods, on his way to honour a dying friend’s wish. The friend’s mother mentions her other son, Bobby, and how he has gone missing. Soon, Vince has more on his hands than just fishing in local waters.

John Cutter, the author, has painted a fascinating picture of Vince Bellator, reminding me of James Bond type characters, like a superhero. Without a special cape though. The book is full of action, and Vince needs all the help he can get, proving that he isn’t depending on help at the same time. He is an expert in making do and using everything to his advantage.

I loved how John Cutter runs through Vince’s thought processes, the way he weighs up adversaries and opportunities. This attention to detail makes the fighting scenes – and there are lots of those – extremely graphic. I was glad it was a book, not a film, but it wasn’t hard to picture the injuries caused by Vince.

It was interesting to read about the collusion between The Brethren and high-level government officials and the FBI. This white supremacist group has managed to climb to the top, making it imperative for Vince Bellator to bring them down before it is too late. John Cutter makes it feel like a very accurate picture of the FBI and government. With many scenes in the book, you ask yourself how he knows so much detail!

All through the book, I wondered about the mother’s question, “What about Bobby?” Where is Bobby, is he still alive and if so, would Vince be able to find him? Then there is one of the Shieldmaiden, one of the women assigned domestic tasks in the group. There is a spark between her and Vince from the start, leading to interesting outcomes and twists in the plot.

The way John Cutter described the leader of the supremacist group was interesting. It gave a good insight into that kind of thinking and leadership within cults. The same goes for other members of The Brethren. It’s not just a superhero book; there is a lot of psychological understanding passed on to the reader. It brings out how seemingly innocent groups can suddenly cross the line between nutcase groups and actual terrorists, and how easy it can be to hide the change.

Vince manages to get inside the group, and as is often the case, finds out more than expected. He uncovers a sickening plot, and although he struggles to get the details, he soon knows enough to know it will be an act of national terror that will wreak devastation on America and all it stands for. The FBI and government officials are out of the picture, so will Vince be able to stop the terrorists?

The book left me wondering till the very end, and I enjoyed the ending. It left the door open for further books about Vince Bellator! I do hope some of the other characters will be in the next book too…

The book obviously contains violence, in actions as well as language, but no bedroom scenes. I was given a review copy but was under no obligation or pressure to write a favourable review. These views are my own.