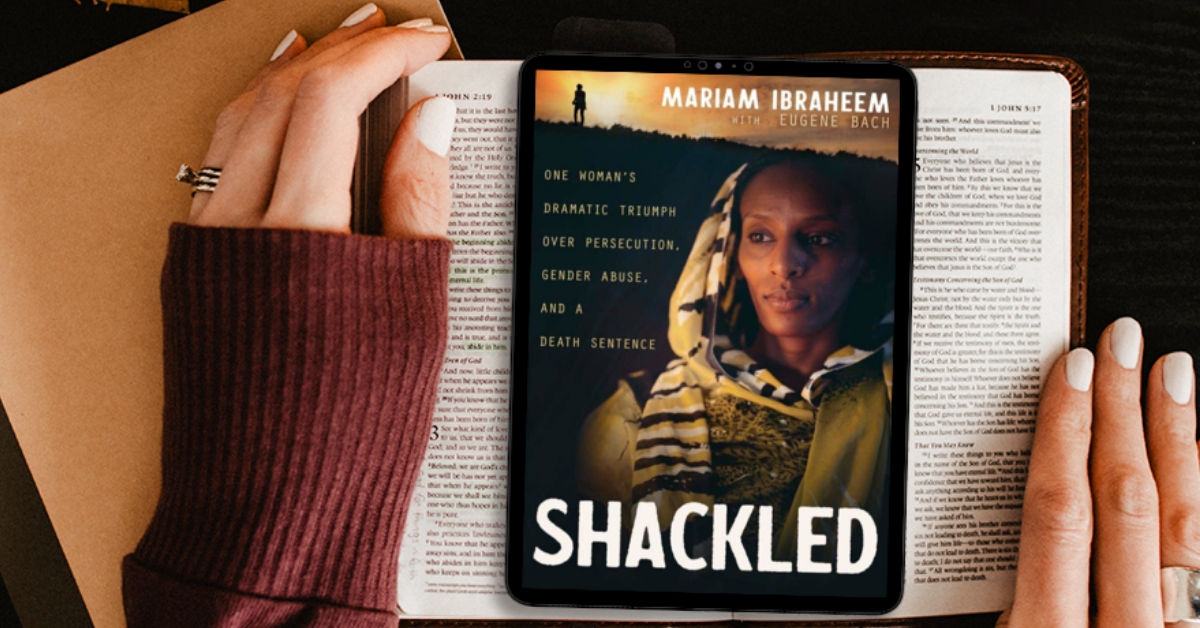 “Something in the center of my being echoed day and night, reassuring me that the most miserable choice I could have made would have been to trade my belief for a chance to get a comfortable education.”

Mariam Ibraheem, the author, opens the book with a shocking prologue where she is condemned to flogging and death by hanging. It made me desperate to read the book as she obviously survived somehow! The book then starts at the beginning, where she is a young girl in a refugee camp.

I love how Mariam talks about her mother and her mother’s faith. She sounds like the kind of woman you would want to meet. Her mother’s life is far from easy but she imparted so much kindness and wisdom, even through the pages of Mariam’s book.

Shackled then goes on to describe their various moves to new places. Some of the chapters are hard to read and the publisher actually put a short warning at the beginning of the book to avoid certain chapters if you feel they might be triggers. Even when they’re not triggers, they were still painful to read, but so necessary to be made aware of what happens to so many girls and women!

Mariam has to make choices along the way to stand for her faith or blend in. As you can see from the quote I put at the start, she decides to stand for her belief in Jesus. This leads to rejection as well as wonderful acceptance, especially by Mentor Chris, another person I would have loved to have known. It is good to read her thoughts at those times of testing. It’s not just a memoir, but also creating a legacy in helping others to think through their choices.

Shackled is harrowing as well as encouraging. Yes, there is so much suffering and grief, but there is so much of Christ in it and so much of God’s goodness and blessing, that I felt privileged to read it. The ending is complex and full of God’s power in overruling so many hearts and minds. It’s encouraging as well as Mariam tells us a little about the work she is involved with at the moment.

Mariam now advocates on behalf of others who are victims of religious persecution and also for women who suffer from the personal prison of abuse. She is the co-founder and director of global mobilization for the Tahrir Alnisa (“Setting Women Free”) Foundation, which serves women and children impacted by domestic abuse and religious-motivated violence. She also serves on the board of directors for Anti-Trafficking International.

Shackled has only just been released, but I definitely recommend it! I was given a review copy via Celebrate Lit but was under no pressure or obligation to write a favourable review.

As it’s a Celebrate Lit book, there is another giveaway! (US only, sorry…)

To celebrate her tour, Mariam is giving away the grand prize package of a $20 Starbucks gift card and a copy of the book!!

Here are the other Blog Stops:

For Him and My Family, March 19

Because I said so — and other adventures in Parenting, March 24

Spoken from the Heart, March 24

Little Homeschool on the Prairie, March 25