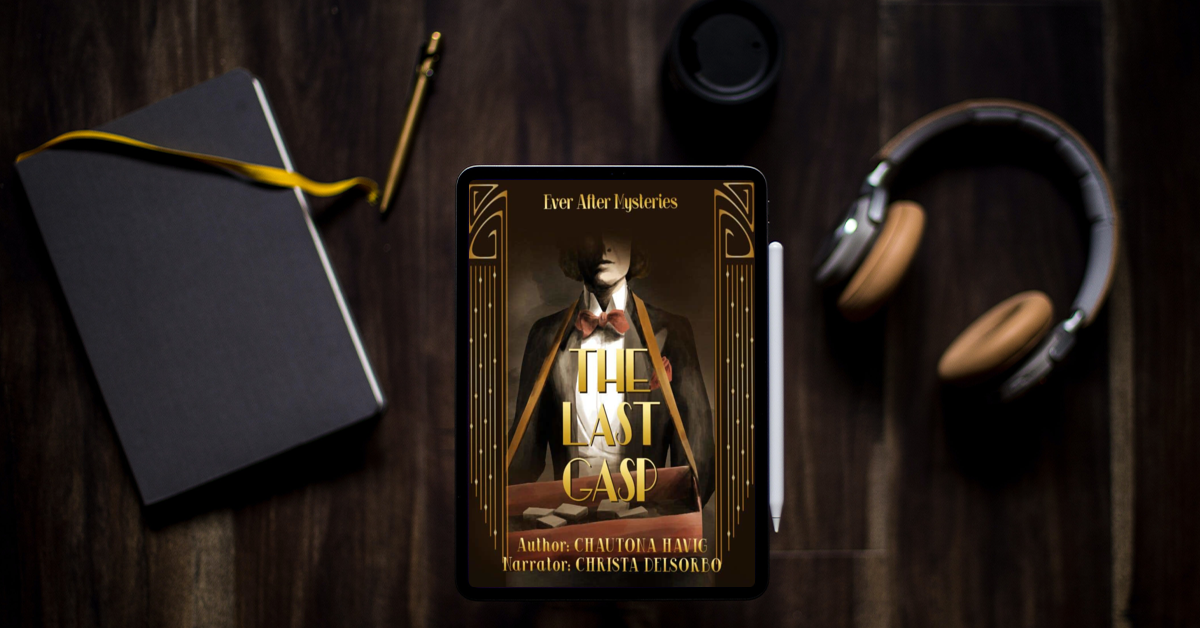 The Last Gasp is one of those wonderful retellings. It’s even better than the original, I think, less sweet and sugary. It combines murder and mayhem with a prospective Bible scholar, a girl who sells cigarettes and sweets in the theatre and street urchins with the Cinderella story.

Chautona Havig, the author, has done a wonderful job using a familiar story and turning it into something way more exciting. Lucinda, Cinda, is the main character. She works as a cigarillo, a cigarette and sweets girl, in the large theatre in Hollywood. Her boyfriend, hopefully soon to be fiancé, is Garrison Prince, a Hollywood star, soon to be back to Gary Prinz, Bible scholar.

It actually took me a long time to realise it’s a Cinderella retelling (I didn’t look at the blurb!), but the book had me gripped from the start. I listened to the audiobook, and was tempted to speed the book up too much, as I wanted to know more!

I loved Lucinda as she is a very balanced character. She’s brave, sensible but struggles in the right places in the book. Gary Prinz is as a prince should be, in my opinion. His faith shines through and is shaped by the events. I enjoyed seeing him grow. The two grow closer together as well, showing the importance of faith, trust and honesty.

The Last Gasp has some great characters, although the audiobook didn’t always make it clear if someone was thinking or speaking. I loved the two sisters, and I would love to hear more about the characters. I realised the same is true for Cinderella itself. What happened to them all? It’s the same for The Last Gasp, as it leaves some questions in your mind. Where did Lucinda come from? What about Gary’s background? I love books that don’t fill in all the details, allowing you to dream on all by yourself!

Miriam Cohen, and her forthrightness, is definitely one of my favourite characters in The Last Gasp. Again, I would love an entire book about her and her husband! The Last Gasp brings the characters to life in such a way, it’s nearly impossible to say goodbye to them at the end.

I loved how Chautona has made The Last Gasp into a murder mystery, set in the 1920s. She has tried to make the setting as authentic as possible, as she explains at the end of the book. Some of the clothes descriptions were wonderful and made it easy to picture the characters in their 1920s dresses.

The Last Gasp is the first book of the Ever After Mysteries Series, which should be an amazing one for your shelves!

I received a free audiobook copy via Celebrate Lit but was under no pressure or obligation to write a favourable review.

As always with Celebrate Lit Tours, there is a giveaway. (US only!)

To celebrate her tour, Christa is giving away the grand prize package of a $25 Amazon gift card and a copy of the book in the winner’s preferred format!!

Here are the other Blog Stops; make sure to visit them all.

For Him and My Family, March 17