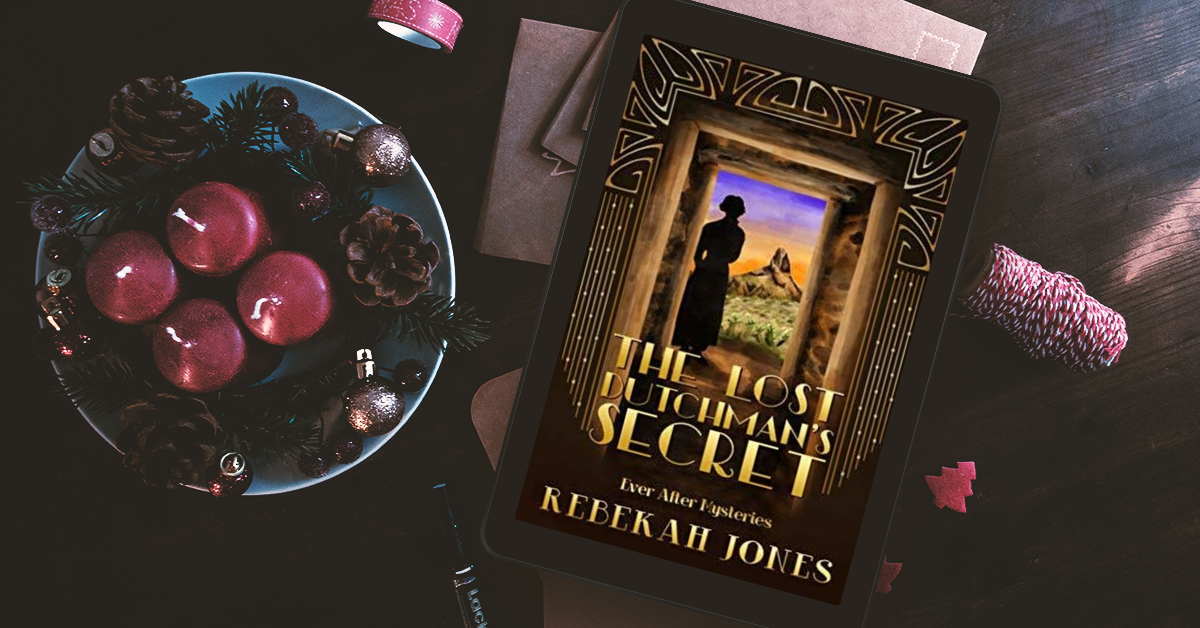 The Lost Dutchman’s Secret is a Christian Historical Mystery. It’s set in the late 1920s, around a goldmining area. Dorothy, the main character, lives with her father in an old hut near the mountains. Her father carves little statues which he sells every now and then. Dorothy loves to read as well as take long hikes in the mountains.

There is trouble almost from the start, as a loan shark comes to get his money. The father hasn’t got anything to pay with, but he doesn’t seem too worried either. Dorothy ends up as the go-between, even though she dreads the loan shark, Charles Sinclair.

Rebekah Jones, the author, has written the book as a modern-ish retelling of Rumpelstiltskin. But it’s a retelling with a twist, as Dorothy finds herself accused of Charles Sinclair’s murder. Will his son, who has been so kind and understanding, accept Dorothy’s denial or will he side with others who believe her guilty?

The Lost Dutchman’s Secret kept me turning pages to find out if Dorothy could spin gold out of thin air. Even with the help of a strange, rumpled man, would there be enough gold to satisfy Charles Sinclair? And who is following Dorothy? Dorothy and Charles’ son have to find out the secrets of the Lost Dutchman, a famous mine that has been lost for a long time.

Historical fiction isn’t my favourite genre, but I thoroughly enjoyed this one. The historical details are woven into the story in a fun way. The characters are great, and I enjoyed getting to know Dorothy and seeing her faith shine through it all. Her father was the most annoying person I have come across, haha, and with Dorothy, I did wonder if he’d been the one to bring Charles to an end…

The Lost Dutchman’s Secret deals with so many interesting things and I must admit, my favourite part of the book was Kat’s explanation of how they saw the mountains and previously secret areas. I loved that paragraph. There are some lovely conversations in the book as well, and I loved the change in Charles Sinclair’s other son, Theo, towards his little half-sister.

My one disappointment? Being Dutch, I hoped it had to do with a roper Dutchman, haha, but this was a great read, and I enjoyed every minute of it!

I received a copy via Celebrate Lit but was under no pressure or obligation to write a favourable review.

For my American friends, there is another giveaway!

To celebrate her tour, Rebekah is giving away the grand prize package of $25 Amazon gift card and a copy of the book!!

Do subscribe to my newsletter to find out about my latest news and stay in touch. But here are the other blogs that will review this wonderful book. Be sure to visit them for the giveaway!

For Him and My Family, December 22

For the Love of Literature, December 22

Through the Fire blogs, December 30

One thought on “The Lost Dutchman’s Secret – Rebekah Jones”