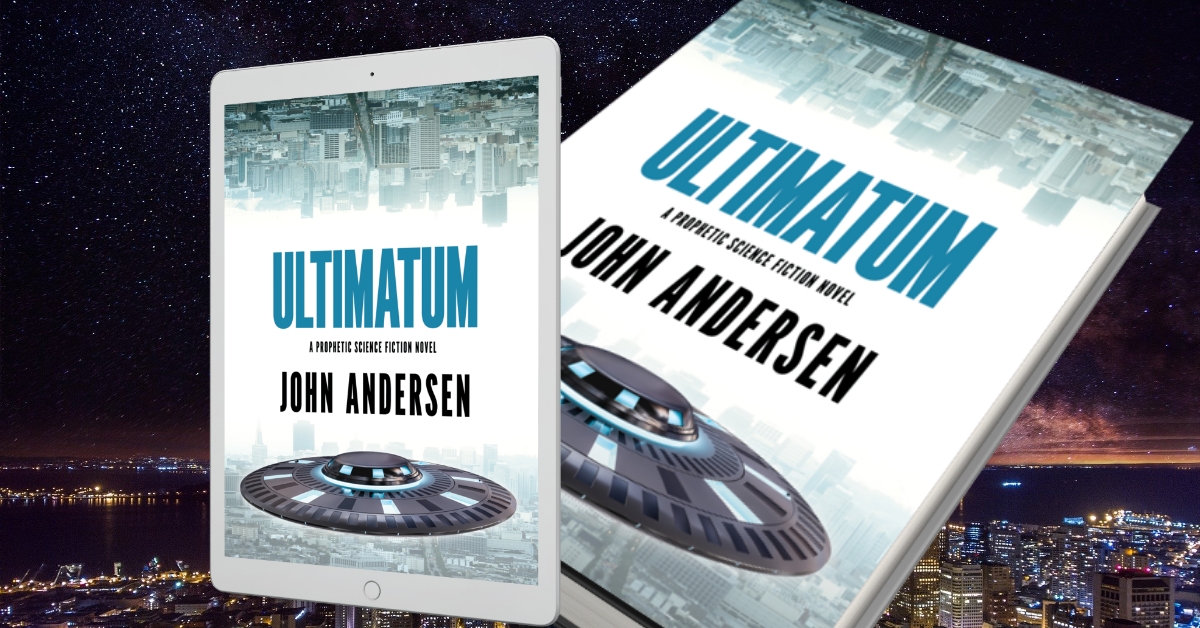 “Little did anyone know just how profoundly everyone’s lives would be affected by this strange visitor during the next ten years.”

Ultimatum is a science fiction book, or rather, a prophetic science fiction novel as the author, John Andersen calls it. I thought that was a nice touch, making it clear from the outset that it’s speculative fiction. It’s set in the year 2047, and things are rather dire on planet Earth. Fortunately, help arrives in the shape of aliens. Or is it fortunately?

Aliens suddenly appear en masse, and their leader disrupts a UN meeting. The alien leader or spokesperson, Charlie, explains the purpose of his coming, and how they have a way of saving the planet, but only if people on Earth can work together, and implement the changes ordered by the aliens. All the heads of state are ordered to come together, to hear what Charlie has to say.

The plan to change Earth will last ten year, and is aimed at giving humanity a chance to eradicate all the wrong in the world by eliminating discrimination, hate, greed, immorality, and envy.  At the end of the ten years, the leadership will decide if Earth will be allowed to continue or not. Charlie is merely the go-between, and he is very keen for people on Earth to succeed. He can’t force them though; it has to be of people’s free will, although they aren’t given many choices. Because of the technology and resources shared, the deal is that, if Earth fails to reach the standards set before them, the aliens will destroy the entire planet.

Ten years doesn’t sound very long, and many people on Earth wonder if they will be able to make it. The support from Charlie and his people is phenomenal, and the first few years see incredible changes in technology, food distribution and world peace. Physical changes are the easiest to make though, so will emotional, social and religious changes follow at the same pace, or will failures in those areas lead to the total destruction of Earth?

The book is rather fast-paced, and although I’m not a science fiction fan, that actually disappointed me. The premise is brilliant, in my opinion, and I would have loved for the book to have been about five times as long! So many great storylines, like the ones dealing with alien women (there are bedroom scenes, but they’re ‘useful’ to the storyline, so didn’t bother me, and they’re very mild), relegated to just odd paragraphs here and there.

I loved the description of the alien car and some of the spaceship descriptions. The book starts with a recounting of an incident, which I thoroughly enjoyed. It was very well written and gripping. I do appreciate that the book would have ended up very long if the same amount of care was given to people throughout the book. There were a lot of characters, some only mentioned once. I can see why, as it was to make a point, and move the story on, but again, I would have loved to know more, as it was such an interesting tale!

Some of the science details were brilliant, and I loved how John Andersen described the unknown disease within the spaceship. The book kept me guessing till the end, as did the Ultimatum. Would people find a way to work together, stand together and live together in peace? Or would the few spoil it for the many?

I was given an electronic copy to review, without any pressure or obligation to do so in a positive way. These views are my own, personal opinion.