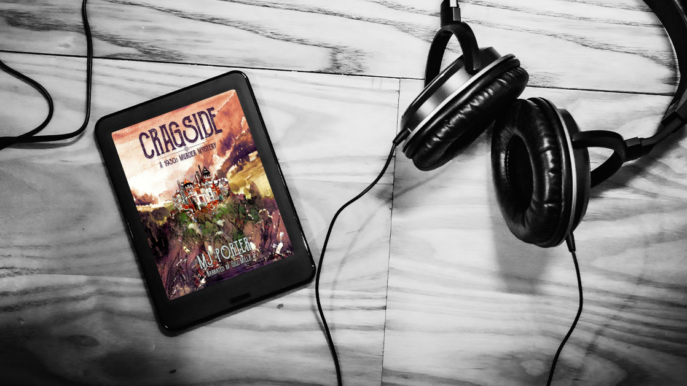 Cragside is a 1930s murder mystery, set in Northumberland at the Cragside Estate. Lady Merryweather has had an awful year, starting with her husband’s murder for which she was apprehended and recently released. This audiobook was narrated by Gill Mills.

Lady Merryweather has been invited for a weekend at Cragside, the home of her friends Lord and Lady Bradbury. No sooner has she arrived than the body of one of the guests is found on the estate and Lady Merryweather is under suspicion straight away. On her release, due to lack of evidence, she returns to Cragside only to find out that a second murder has taken place.

M.J. Porter, the author, has done a wonderful job in describing the setting as well as the different characters. In the historical note at the end, the author explains how the author visited Cragside Estate a lot during the 2020 lockdown. The description of the Estate reflects that.

Lady Merryweather is under suspicion of murder again, and the people she thought of as friends seem keen for her to stay like that. During her weekend at Cragside, she comes to realise that her friends aren’t what she thought they were. Is there nobody she can trust? And what about her driver? Lady Merryweather gets involved in trying to unravel the murders and soon realises that there might be a connection with her husband’s murder.

Cragside isn’t fast-paced to start with and raises more questions than it gives answers, but bit by bit, I started to see more depth. Lady Merryweather’s character is slowly unfolding as well and links with others around her become clearer. I love how the author portrays the characters, greatly helped by the narrator, Gill Mills, with her wonderful accents. Each person could be recognised easily, making the book even more fun.

Cragside is set in the 1930s, and it was fascinating to hear about the different costumes as well as police procedures which the author had researched. Cragside sounds like an interesting place to visit, even though it was badly damaged during storm Arwen. The author makes it clear there is no connection to the real owners, but the description of the house are as accurate as possible.

The ending of Cragside was interesting and unexpected, and I was seriously worried that Lady Merryweather would join the fate of the other murdered guests. Cragside reminded me of Agatha Christie novels, with bodies piling up and old fashioned detective work. Listening to it was a real treat.

I hope there will be other Lady Merryweater books, although M.J. Porter’s Viking books sound interesting as well, and might count as vital research for my own Viking Series I’m plotting!

I received a copy of Cragside via Love Books Tours but was under no pressure or obligation to write a favourable review.