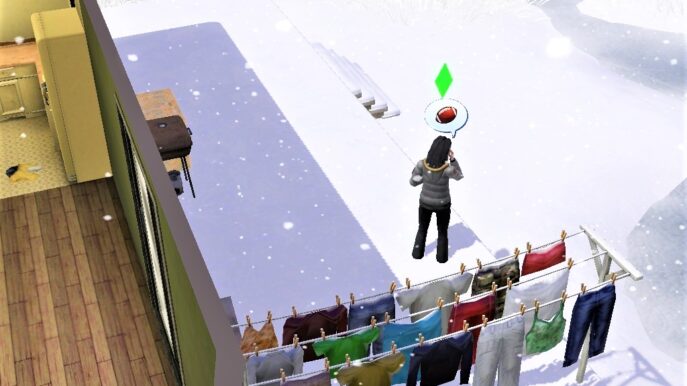 Welcome to my Advent series! I’m using the Sims to do the Advent Writing Plan, from Bryony Wells. I found her and the plan on Instagram, and decided to follow the plan. Each day has some verses, to do with Advent. I copy them out in a notebook, like the plan was. I also use the verses as a base for this serial story set in Sims 3. Each day it will be a new Advent season in my Sims’ life, apart from day 1, which is near the end of the winter when she moves into her cabin.

I will tell you the verses each day, and hopefully you can see them playing out in my sims’ life. Today it’s Proverbs 8:33-35: Hear instruction, and be wise, and refuse it not. Blessed is the man that heareth me, watching daily at my gates, waiting at the posts of my doors. For whoso findeth me findeth life, and shall obtain favour of the Lord.

I couldn’t believe it was nearly Christmas. For months, I had turned my little hut into a home. Not that I was any good at homemaking, and having to catch fish to make a living rather stopped me from spending a lot of time in my little home. The creek at the bottom of the garden was such a blessing and my life felt full and rich. I didn’t have any friends, which was hard. Loneliness can creep up on you and a simple phone call can stop it from getting you down. As long as you have somebody to phone.

When I started to get down, I simply addressed a few people at the shop, to make sure I had a couple of phone contacts. “Hi, I’m Mariella. I don’t think I have met you before?” I knew I hadn’t met him before, but this sounded better, but my face felt warm as I hated the lie.

“No, I don’t think we have met,” the man replied and I’m sorry to say, I have forgotten his name already. “Do you live near the shop?” He carried on, and I explained that I was new and lived in one of the houses near the swamp area. He nodded. “It can get damp down there. Hopefully, you will find the winter passes soon, as it gets cold and that makes it harder to get around,” he smiled and started walking away.

Frantically, I tried to come up with something interesting, but as he got into a taxi, I turned around and introduced myself to the next person coming from the shop. Another man. “Hi, I’m Mariella and I wondered if you could tell me a little about the winters around here. You look like you live local.” I knew it wasn’t the best way to make friends, but the last man’s comment worried me.

“Hi, you must be new,” the man smiled, his face rather odd. I tried not to stare and wondered how old he was. He seemed a lot kinder than the last man, and in the back of my mind I started to wonder… “Anyone who has been here for more than a year knows all about our winters,” he continued and I tried to chuckle. “What do you do for a living?” he asked and I explained about my fishing contract. He nodded and looked away, “You will need to travel a bit further. I hope you don’t have any children? You will find it hard to take them with you when they’re younger and babysitters get expensive,” he said and looked at my belly.

I blushed, “Oh no, I’m single,” I said quickly, and tried to smile. I didn’t want to travel to fish, not with the creek in my garden! “I hope there will be lots of open water in the swamp, travelling takes up so much time,” I said, making a dismissive gesture with my hand. I wasn’t into running at all and could imagine myself staggering through snowy fields to pay the bills.

The man shrugged. “There is some open water in the swamp, but you will need to be careful. It can be hard going, as you can spend the entire day fishing and catch nothing. Make sure to move around if the fish won’t bite.”

I smacked the water with my fishing rod, brushing half-frozen tears off my cheeks. Winter had arrived, with more snow and ice than I had imagined. It seemed to be summer one day, and midwinter the next. I woke up to a frozen creek and a white garden. There was nothing for it; I had to walk to the main swamp. It was nearly dark, and I had caught one fish. Just as I smacked the water, I remembered Ron’s advice. It was too late today, but it wouldn’t happen to me again. On my way home, I rang Ron. “You were right,” I sighed after we had chatted for a while. “I must admit, I forgot your advice, and spent the whole day catching nothing.” I pulled a face as he laughed and repeated the same advice a few times. “Yes, I know…no, it definitely won’t happen again,” I tried to laugh, proving I wasn’t that upset. He was kind about it and again, I wondered about his age.

“You are very good to help me out,” I started, making my voice slower and sweeter, “I appreciate you helping a girl like me,” I continued. I held my breath; was I going somewhere with this? He had a strange face, but that would simply be endearing after a while. He probably had a job, so wouldn’t be around much anyway. Time wasn’t on my side, for this first winter brought home that I would be limited in the number of winters I had ahead of me. And I had dreams. A tiny shudder went through me. “The cold,” I muttered and listened to Ron’s voice again.

“…sad you missed the party, although it wasn’t a large one,” I caught him saying. “A few friends came, but at my age, friends disappear rather quickly,” he chuckled. “I will have a few winters left, of course, it’s not as if Grim is lurking outside my house right now,” he said, as if I had suggested something that macabre. I swallowed and opened my mouth, but he continued, “I quite like the grey hair, I must admit although I can’t make up my mind to retire or not,” and my heart sank. I had missed the Ron boat. For a moment I considered dating him anyway. As he said, he had many winters left, but I shook my head at my phone. “Unwise,” I mouthed to myself.

That was that. I couldn’t bring myself to ring Ron again, and the long days before Christmas were the coldest days ever. I couldn’t afford decorations, although the day before Christmas I managed some garlands and mistletoe. With Ron out of the picture, I have no idea why I spent hard-earned money on mistletoe, but I didn’t want to give up on my dreams. I was doing my best to wait more patiently, trying to trust God with my days and weeks, rather than succumbing to the temptation of throwing myself at the first stranger I could think of. “I will get to use the mistletoe,” I whispered to myself, “I just need to wait, be patient, follow instructions from the Lord and be wise.” I was glad when January arrived and I could box up the mistletoe, my first Christmas where all blessings seemed to have passed me by.