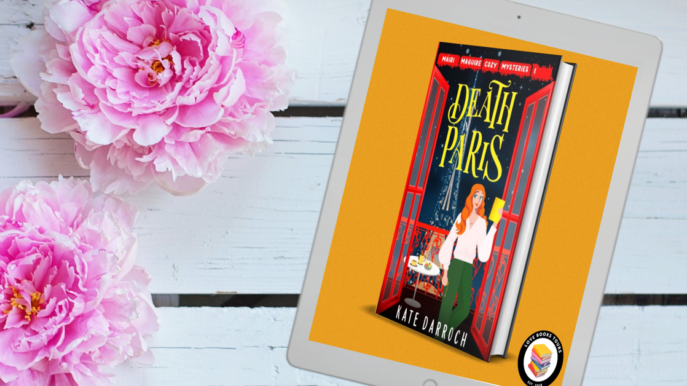 Death in Paris starts off right in the exciting part of the story, making me want to find out every last detail! Mairi, the main character, is telling us what happened and how her friend Lianna is led away in handcuffs by the French police. I felt terrible for her; fancy having a friend who turned out to be a murderer!

Kate Darroch, the author, has done a great job in setting the scene, luring you in straight away. The story is written in a hilarious way, but the suspense was there in every line. Mairi is a great character, and I felt for her. Life hasn’t been easy for the last few months, and now her friend is arrested on suspicion of murder.

Mairi is helped by a gentleman, but is he who he says he is? And is he actually helping? The story has some brilliant characters and it’s hard to choose a favourite. The helping gentleman probably wins… Most of the story is set in Paris, where Mairi and Lianna were meant to spend a few relaxed days before travelling onwards.

I love the way Mairi tells us the story. It’s full of wit and observations, making you feel at home. The book didn’t take me long to read, as I couldn’t put it down! There are different groups working together or against one another, so a few times I struggled to remember who was what in the book, but it does make it obvious as you read. Death in Paris tells you a little about Paris, which makes it an even better read. I didn’t know anything about the French justice system, so that side of the story was interesting as well.

Mairi has decided to do all she can to find the real murderer, with the help of the kind gentleman. The French police isn’t looking for the murderer, as they have Lianna, so it’s up to Mairi to help her friend. Obviously, this task is not without danger, but Mairi is determined. There is a shocker of a cliffhanger at the end of the book though, so be warned! I thoroughly enjoyed Death in Paris and can’t wait for the next one in the series!

I received a review copy via Love Books Tours but was under no pressure or obligation to write a favourable review.