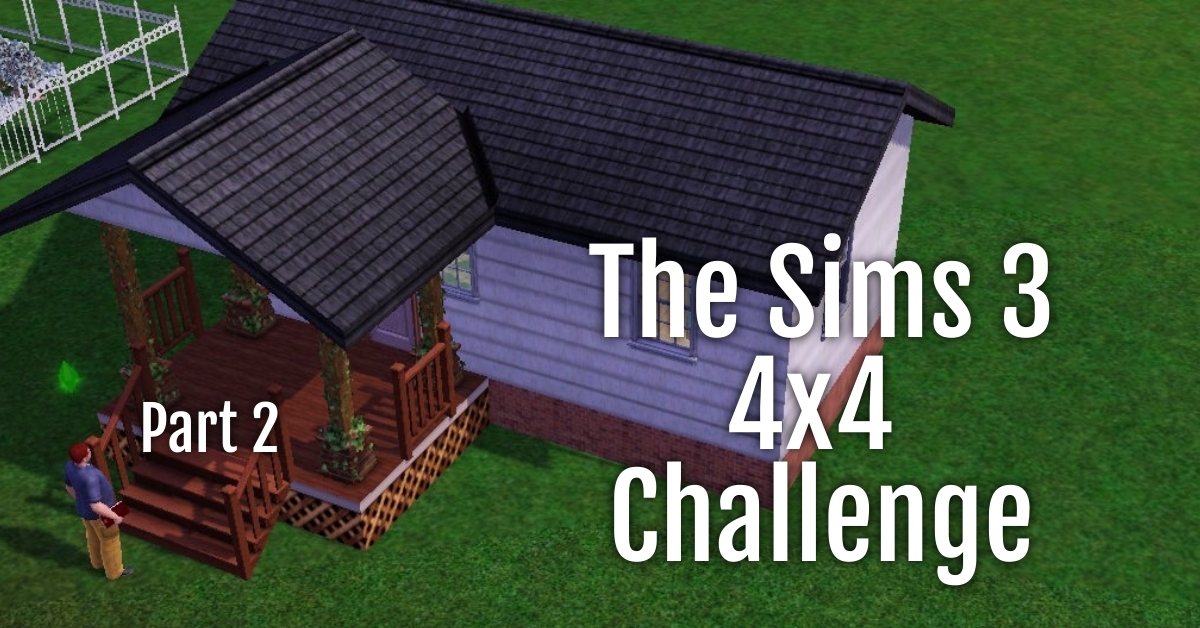 The story continues. The aim is to get ten 4×4 blocks as a house. Each adult has to earn 10,000 simoleans to buy the next block. My Sims, David Growy and his wife Sidney, have three blocks so far.

David smiled. “You’ve been a great help, Samantha,” he said, looking at the girl’s painting. Ever since she was a young child, Samantha spent every free moment painting, doing her best to help with the family budget.

David glanced towards Sidney. Her sudden dashes to the bathroom were all explained when her pregnancy was announced. “It will be a tight squeeze,” she had frowned, “but I’m sure we can manage and Samantha is a good sleeper; hopefully, the baby won’t keep her awake too much.”

David took a deep breath and started rearranging the furniture. How was he going to fit in Samantha’s bed, a crib and the toddler toys? Just then Sidney shouted out. David looked at his wife’s beaming face, as she waved papers in the air. “Look, David, your royalties. We’re there!” David couldn’t believe they had hit the financial requirement, but as the builders added another block to the tiny house, a huge block was shifted off his chest.

Samantha was pleased as well. There was space for her to have a bed although the crib would be nearby. As a teenager, painting wasn’t the only contribution to the family she would be expected to make. “Hopefully it’s a sleepy baby,” she grinned at Sidney as her mother came to admire her latest painting.

“I love your art,” her mum said, “and maybe, once we’re doing well, we should hang one of your pictures. I know you rely on the income, but they’re so good, it seems a shame to sell them all.”

Samantha had to agree. Although she liked to paint similar pictures, some turned out well, and to see them go to random buyers could be hard. “I better start another one, as the last one sold well. Maybe this one could go in my new corner.” She looked at the newly painted wall next to her bed. She could pretend to have a bedroom now, rather than sleep next to the dining table.

Joseph was born, moments after David’s birthday. He couldn’t believe he was elderly with an infant son. Hopefully Grim would stay away for a while longer, as he wanted to see his son grow up. Joseph was a lovely boy, all snuggles and smiles. “He looks just like you, Dad,” Samantha smiled and cuddled her little brother, “If only you slept all through the night. Some days I struggle to get my homework done, don’t I, don’t I,” she crooned into the little boy’s face.

The adults worked as hard as they could, made easier by the new desktop computer they had bought. It meant David could work on his novels at all hours, without having to leave the house. “It’s a proper job alright,” he grumbled to Sidney one evening when they’re playing chess at the new table. “It’s all hours though and I struggle to stay awake some days. I know I have a good routine, but it’s filling every moment of my life. I’m sorry I have been leaving Joseph to you so much.”

The hard work paid off though, for the next block was granted in record time. Not a moment too late either, as young Joseph could now play indoors as well as learn to walk without his parents risking frostbite. “My own room,” Samantha glowed, “I can’t believe how large our cottage is getting. I get to sleep better as well, although Jo has been sleeping well recently.”

The family looked at each other with silly grins on their faces. They were sloughed on their sofa, watching television. David’s jaws ached from smiling at the huge screen, hardly daring to believe they now had six blocks built. Six blocks and the cottage felt like a proper home. He rubbed his grey hair, convinced it was thinning at the top. How much longer would he have? Sidney got up and helped Joseph one more time, knowing any moment now he would turn into a school child. Would he be an artist like Samantha? Or should they simply deduct his earnings and allow him to play, seeing they had more living space?

Sidney sighed. They had nearly enough for the new block, but she wasn’t sure if she was ready for change. There would be many changes with birthdays piled on top of one another. Celebrating Joseph’s birthday would be hard, she knew that. Looking at her greying husband she shuddered. “Do we even need another block? Our family is shrinking, not growing, so what is the point of adding more space to the house?” She gestured toward the black shape on the wall, “We have a television, a chess table and a painting easel. Our garden is huge, making it a full-time job, bringing in plenty of money as well as your income from royalties.”

David grimaced and tried to nod. He felt bad, sitting down watching television when there was still a drama novel to finish. The question was, would David’s royalties come to the family after Grim took him? Sidney hoped they would. After all, royalties were promised for each book six weeks running, so surely the family was entitled to them? Life was hardly ever fair though and Sidney sat down again, her face tight with worry, ignoring the odours from Joseph’s blue potty.