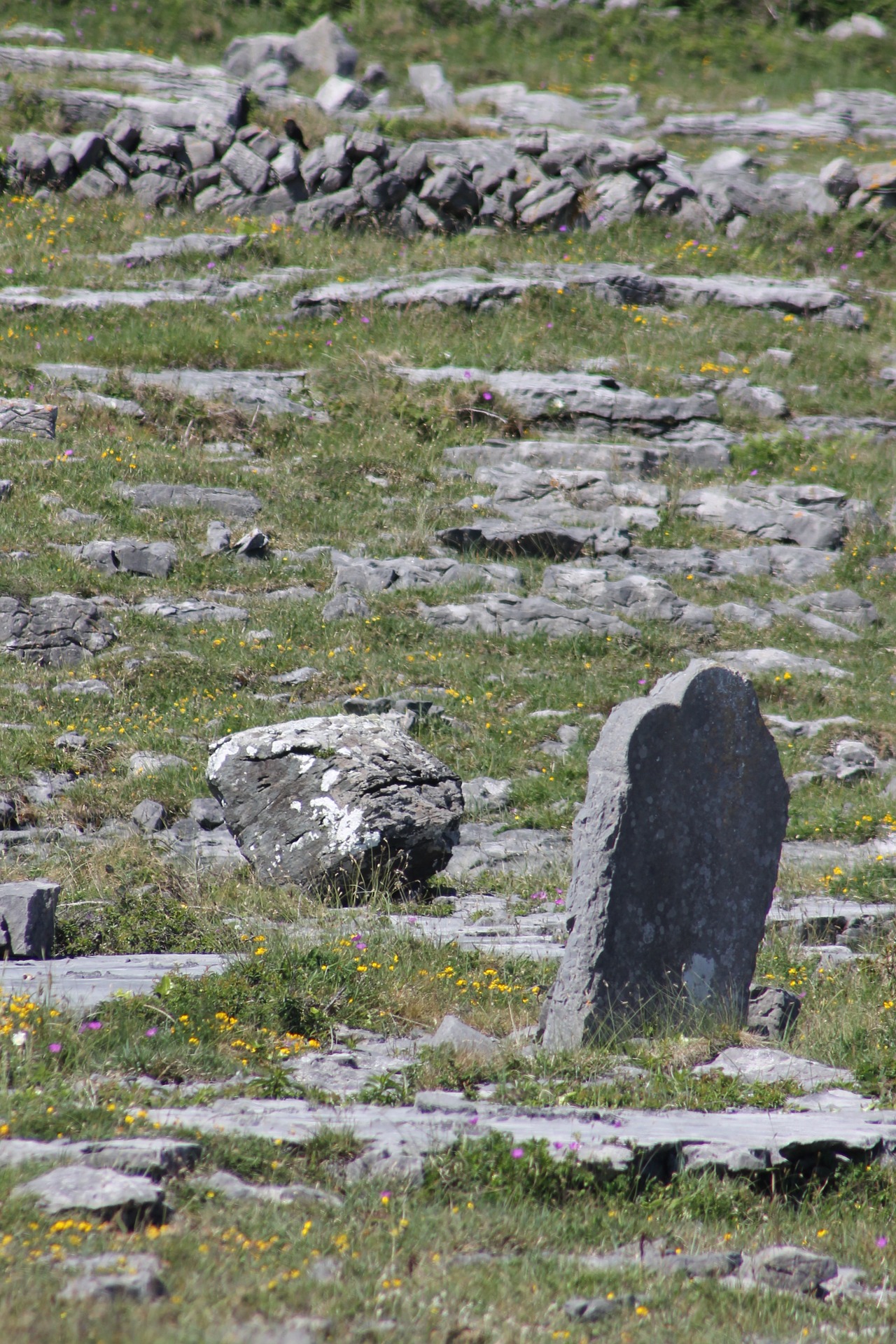 She moves in the semi darkness along the deserted road, her eyes narrowed, longing to spot other people. Every now and again she looks over her shoulder, quickly, almost embarrassed. Nobody. The endless road to the ferry docks, built to deal with summer visitors and busloads of tourists, making her groan. At this time of year the little village is quiet, the road devoid of welcome crowds.

She swallows a little when she sees the choppy water, realising for the first time that the wind pushing and tugging at her would of course have an effect on the sea as well. Too soon she gets to the ticket office, unable to come up with an alternative. During her walk she had decided to go to the largest island; the furthest away, and not just from the coast. “One day return to Inishmore, please,” she says, feeling that the lot has been cast. The man nods, “Oh aye,” he says, handing her the change and ticket, then as a rather irrelevant afterthought, “There won’t be a boat back from Inishmore today, because of the storm.” He smiles at her, as if just making pleasant chit chat, rather than seeing her stranded on Inishmore.

“Ehm, I do need to get back today as well,” she says breathless, unsure whether she has understood the man correctly, for surely he would have explained when she ordered the ticket, rather than afterwards?

“Well, then, in that case you’re better off going to Inishmaan today. There is a four o’clock boat back from there. Mind you, that will be the only one going back today,” he says. She nods, swallows at the unexpected change. “Just a minor detail,” she tells herself, struggling to slide the return ticket into her purse. She walks to the ferry, shivering, not only from the never ending wind, pulling her coat tighter, moving her handbag further round to the front of her body.

It had started at the Cliffs of Moher, the amazing views suddenly turning shadowy and dark with a chillier gust of wind than before. She had spun round, expecting to see that one face in the crowds of tourists. No face stood out, but the icy fingers around her heart had not relinquished their grip one bit; on the contrary, they had grown in strength and numbers. She had still looked out over the cliffs, taken random pictures, but her heart had not been engaged anymore; some of the pictures will be blurry.

Now the heaviness is back. She hopes the little boat will come soon, for surely by going to the islands she will escape, even if only temporarily. She chooses to sit outside on the hard plastic chairs, her lilac scarf flapping in the strong breeze, relaxing a little, the rocking motion of the boat calming her.

Inishmaan looms up, dark against the glistening waves. She hesitates, feeing safer on board the little boat. Should she simply stay on the boat? In the end she gets off the little boat, onto the concrete quayside. Of course she gets off. After all, her ticket was for Inishmaan. There are quite a few others getting off, giving her a sense of security. “Safety in numbers,” she mumbles to herself, her soft voice grounding her. “I’ll just walk, have lunch, then get the boat back.”

By the time she gets to the end of the minuscule harbour her safety in numbers argument is no longer valid, for people have randomly dispersed, leaving her standing alone. She bites her lip. What should she do? The sky is pale blue, whispy clouds forming and breaking ranks continually. It feels so peaceful, the seagulls the only thing to be heard.

Taking a deep breath she sets off down the coast road, amazed by the huge grey rocks littering the shore, impressed with the dry stone walling, intricately stacked to form walls with gaps, presumably to let the relentless wind through. The walls surround tiny grassy patches, making a patchwork of interesting shapes. She feels her shoulders relaxing, her steps regain some of the bounce. “It’s so beautiful, I’m glad I came. The sun, the crash of the waves, these walls…” She can feel the corners of her mouth arching up again. She walks till the end, then follows the road round, back towards the little harbour, hoping there will be a place to find some lunch near the harbour.

She hears it, soon after rounding the bend, a rock sliding against another rock, the unmistaken sound of a footstep. Her heart stutters to a halt, then picks up the pace again. She looks around everywhere, her stone-cold fingers gripping each other, as if supporting themselves. The fact nobody can be seen doesn’t make it any better. She walks on, faster, her breath coming in gasps, her neck stretching as if wanting be further ahead. Out on the open road she feels exposed, vulnerable, but there is nowhere to hide. No trees, only small stubborn shrubs and the endless grey walls which now feel secretive.

She walks a further, the fear and sense of doom growing with each little crunching noise. Her heart is drumming away, the blood whooshing in her ears making it impossible to hear, and her legs are starting to refuse duty. She knows she will have to stop, she will have to do something. The fear is overwhelming and threatening to drown her in waves more powerful than the ones that can still be heard splashing in the distance.  She decides to hide in the only spaces afforded to her this side of the island: one of the little green patchwork squares, hoping that the grey slanted stones will hide her, protect her.

There is a dull thud, her hand slipping off the warm grey top stone, and she watches with darkening eyes how the grass of Inishmaan colours with blood, her lifeblood. A last thought drifts through her mind, the lines of a Dutch war poem,

“A bird fell that wasn’t a bird,
Not far from him among the herbs,
And he didn’t wake up again for the grass
Coloured red, and everyone knows what that means.”