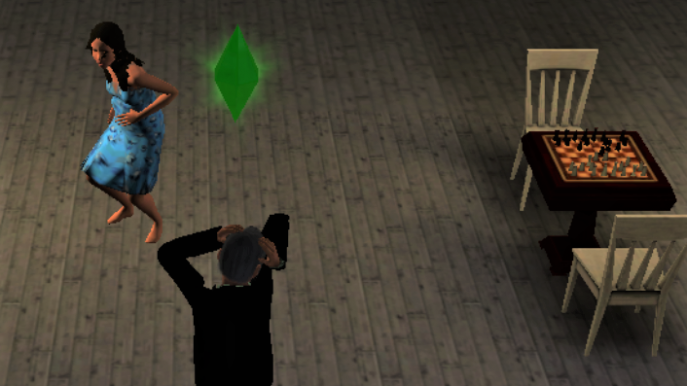 Kesha is pleased, loving life every day. Soon the baby will be here. “Could be babies,” she whispers to Justin that evening and they both smile, thinking of the treatment they both paid for out of their Life Points… The treatment was certainly successful, for the following day triplets are born! Kesha laughs, and spins each baby round as it’s born, although the laugh sounds a little bit forced after Lisa is born. When Lionel has been spun round, Kesha looks around, and the smile soon disappears. There is just one crib! She puts Lisa and Lionel on the kitchen floor, and tends to Liam who is in the crib. Soon there are two shrieking infants, and Kesha ends up rotating the babies.

Justin and Kesha are over the moon for a day, or half a day when the babies are first born, then they realise that looking after Liam, Lisa and Lionel is going to be hard work. Kesha is exhausted before the Bayou settles for the night, and they live on left overs. The fridge is not an expensive fridge, so often the food tastes off, but there is no time or energy to cook fresh meals. Lamech is too young to cook, but he helps with little jobs around the house, although his school work suffers from the broken nights. Every time one of the babies cries Lamech gets up to tell the baby off, not understanding that he is not improving the situation one bit. Justin is very busy, helping where he can. “I thought having twins would be wonderful and cute,” mutters Kesha, “however triplets is three times as hard, I’m sure!” Secretly she is starting to regret the treatment, and why did they think both of them having the treatment was a good idea?

Kesha struggles on, still happy in the knowledge that soon the three babies will grow up, and her life will go back to amazing once more.  She can just picture their little home, filled with a teenager and three little children, whilst she and Justin sit and eat outside overlooking the still Bayou. That dream is soon shattered. Justin, exhausted and fed up, turns to another woman. Kesha finds out, and their rowing is heard over the shrieking of the infants, two of whom are on the floor, as Kesha still hasn’t been able to afford cribs. Justin was going to get them, but he had gotten side-tracked. Kesha screams at Justin in a rage, and he answers in kind. “Fine! I’ll make my own life, a quiet one! One with my girlfriend where it’s not me doing all the washing and lifting and fixing! One where I can eat in peace without two bawling babies on the floor!”

With that Justin storms off, and Kesha spends the next hours sorting out the crying infants who have just about turned toddlers. She feeds them, holds them and walks with them. By the time Lionel is asleep in the crib and Lisa and Liam are happily playing on the floor, Kesha notices the changes round the house. They didn’t have much to start with, but now there’s even less! Justin has taken as much as he could. Kesha rushes to the laptop, which needs repairing. “Come on,” she mutters frantically wielding her screwdriver, hoping the laptop won’t burst into flames again, “I need to check…” Her fears are confirmed when she realises that their bank account has been drained. With three toddlers and a boy about to turn teenager Kesha couldn’t keep up with her job. She and Justin had agreed that she would quit her job, relying on Justin’s generous income. Now this income is gone too, as is every Simolean they had saved up together.

Kesha sits back and feels the tears but is unable to stop them. Her wonderful life is in tatters, and she has no idea how to scramble out of the mess. She has to keep moving somehow, but when Lamech turns a teenager and is able to help, Kesha simply gives up. She can feel herself getting weaker, but every time she moves towards the fridge, she shrugs and turns away. What’s the point after all? Grim’s visit jolts her, and she makes a last futile attempt to get to the fridge. Lamech is crying and shouting, but there is nothing Kesha can do anymore.

Lamech looks around the house. He is the man of he house now. He is in charge of paying the bills as well as looking after his three little siblings. Forget school, forget a career or anything like that. He will need to make money, and fast. The wailing Lisa makes all other tasks impossible, and by the time Lamech has seen to her as well as Liam and Lionel, it is dark outside and he is exhausted and starving.

The days pass in a blur, a lot of it spent sleeping on the floor. There is always a job that seems so urgent that even his bed will have to wait. Until sleep overcomes him, and Lamech collapses on the floor. The brief sleep on the damp floor gives him just enough energy for one more small task. With a lot of effort he manages to get his siblings potty trained as well as walking and talking, but only just. He doesn’t know how he managed, and looking back it seems that all he did was move them around like a game of musical cribs. If only he could earn more money and get them all their own crib.

Being able to afford a cleaner would be great as well, but at the moment Lamech is happy to be able to afford food for himself and pay the bills twice a week. “The triplets are lovely whenever they aren’t screaming,” he tells his friend on the phone, “but socialising is not so good at the moment. The house is small so whenever I fall asleep one of them is bound to wake up and cry.” He listens, then says, “Yeah, well, I’m the lowest grade at the moment, an F, but at least nobody has been to see me about that. When the triplets go to school I might look into it. Yes, yes, I know, it would be good to get out, and yes, I am going stir crazy, but there is nothing I can do. We can’t afford a babysitter anyway. I know everyone my age goes to school, and I will try once they’re no longer toddlers.”

He puts the phone down, and thinks about that. Will he really go to school when the triplets grow up? He’d like to, for Lamech is bright enough, but looking round the small swampy smelling house he sighs. Not much hope there, he thinks, picking up another bundle of washing. Lamech knows he will have to still work hard to cover the bills, especially when the triplets grow up as they will need dinners after school and breakfast in the mornings. They might be able to help with some of the bills by fishing in the little stream at the end of their driveway.

Soon enough the screaming has stopped and is replaced by chatter and laughter. Lamech’s mood improves as well, and he manages to get some sort of a routine going. While the children sleep at night Lamech writes his novels and does the household chores. As soon as the triplets have dashed off to school, Lamech crawls into the one bed they all need to share and sleeps till the end of the school day. Lisa works hard, and Lionel and Liam help by fishing every free minute. Soon the little family has saved up enough to buy an easel for Lisa who is very talented. Lisa paints as much as she can to supplement the income.

Lamech is immensely proud to see his siblings get onto honour roll, days before they turn into teenagers themselves, wishing Kesha had been there too. Lamech manages to return to school, even though it’s just for a few days, but to share the teenage years together for a short time is very special. There is no way he can improve his grades enough to be allowed to choose a Life Trait, but Lamech feels proud anyway. He has seen his siblings all the way through to their teenage years, and now he can register as self-employed, allowing him to do most of the chores around the house as well. Lisa, Liam and Lionel help where they can, but school work is a lot more stressful as teenagers, so Lamech is happy to support them, knowing that they will grow up soon enough.

Looking around the swampy home, he feels satisfied, having completed the Hard Life Challenge, and he got through with flying colours too. Well, almost, for he never got on the honour roll as a teenager, and he didn’t get to have the teenage years like other boys did, but looking at his three siblings he smiles and feels no regrets. No regrets at all, and thinking of the times that he collapsed on the floor merely makes him smile in a sad, nostalgic way, glad that his siblings will never need to experience that kind of childhood. But he managed, and he did well!