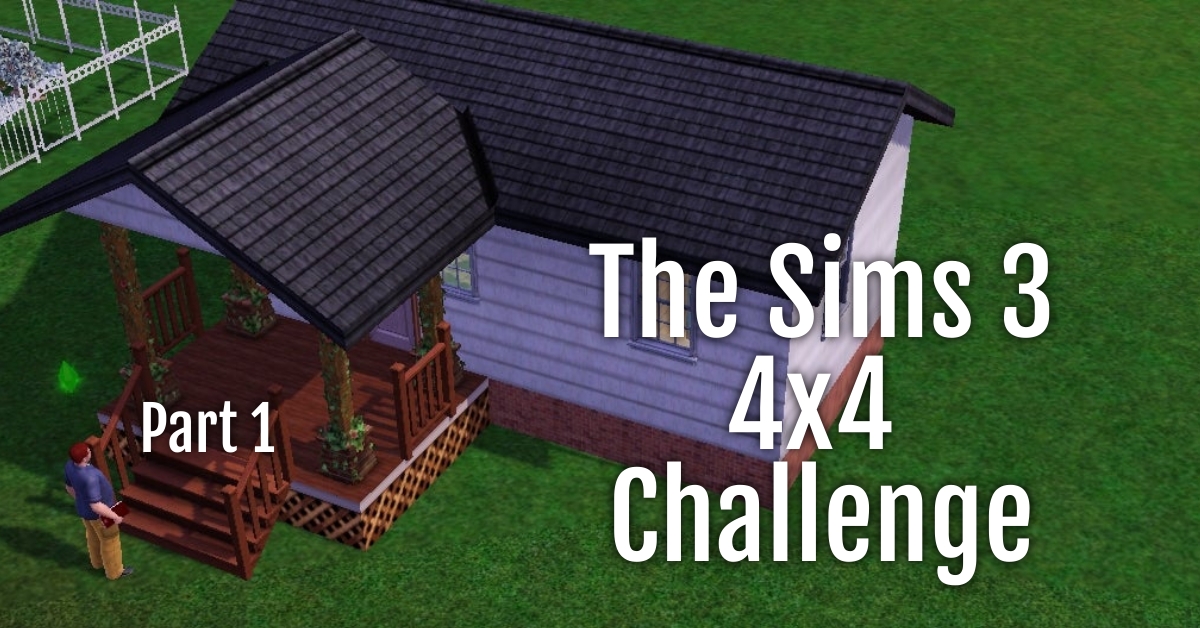 As you might know, my writing started with The Sims Mobile. I also enjoy Sims 3 and Sims 2. The thing I like about the last two is that there are lots of Challenges around. These are set up by other players and can be very old. I have just started a new challenge, the 4×4 Challenge.

You start off with a very small, 4×4 house that needs certain furniture in it. You get a small sum of money to pay for bills. Once you reach 10,000 Simoleans, you can add another 4×4 square. Any additional people in the house, and the amount you need before your next square doubles…

So I started with this cute little cottage and a Sim called David Growy. I like the surnames to show me which challenge I’m playing so as to keep track. So David Growy it is, as hopefully, the house will keep growing. I managed to get the furniture in, but somehow the chair didn’t work. I gave up in the end, and he just ate his meals standing up. I later realised that the fridge wasn’t mentioned on the list, so maybe I should have left the fridge out and put the table there instead. He could have lived off the land or bought meals out in the little eateries provided.

Here is David’ story up till Block three.

David washed his dirty plate and looked around the cramped cabin. If only his books sold better, he would be able to create more space. He sighed. No use complaining. There was food to be harvested before dashing off to the library to work on his latest novel. Sci-Fi. Not his favourite genre, but beggars can’t be choosers. It paid, and that was all that mattered.

David walked out into the neat little garden. It wasn’t big, but he managed to grow quite a lot in a short time. Just in time too, autumn was around the corner and the plants would go dormant. Once the last apple tree was cleared David sniffed and shuddered. Gardening was dirty work. He showered and decided to give his old friend a call. He’d accidentally tried to crash the guy’s party, but he had been very gracious about it.

“How are you?” David smiled at the phone then frowned. “No, I didn’t realise that. How awful. I only talked to her a few days ago in the library. No, we weren’t really friends, not yet anyway. She seemed amazing.”

The news that Carly had passed came as a shock. David hung up and got a taxi to the library. He was relieved the computer was free. First, he played some games to cheer himself up and to stop his mind from thinking too much about the house extension. Then he knuckled down to work. “…he gazed into the distance, where the triple moon could be clearly seen. Nobody knew what the Dark Doctor had done, but somehow he must have split the moons. He wondered about the effect it would have on them all. What about dogs, he thought, what happens when it’s full moon times three.”

David grinned until he had a message come through. The royalties had come in! He jumped up when he saw the amount. It was time to extend the house. All kinds of possibilities came to mind at once. David pushed all thoughts away. First the extension, then he would think about having a family. Imagine having a spouse in the house with him, someone to talk to and share the responsibilities with. Of course, it would put the price up for the next extension, but surely it would be worth it?

The extension looked amazing, giving him so much more space. David leaned back in his chair, patting the brand new laptop. No more running to the library for him. He could stay home, potter around the garden…He looked out of the windows and smiled. No gardening for a while. The snow covered everything, making it look like a winter wonderland. That reminded him. He should travel to the winter festival grounds. There might be some girls around…

In fact, David met Sidney outside the grocery store. He wasn’t going in, just looking as it were. She was friendly and chatty and laughed at all the right moments. David went home glowing, desperate for sleep before the wedding the following day. No private elopement for them. No, Sidney should have the best public wedding David could afford. Hopefully, she’d have a good job and be a keen gardener.

Sidney’s part-time job wasn’t going to get them that extension any time soon, David realised. Never mind, there was the garden and Sidney might get promoted soon after their honeymoon. If she hadn’t fallen pregnant. David cringed when he saw her running for the bathroom, knowing she would be off work for a while and he would be distracted by a tiny one. So much for his aim to achieve Speed Writer status. He’d be lucky to achieve Food-on-the-Table status at this rate.

Sidney was very apologetic but thrilled at the same time. “I love children,” she gushed, “and as I work part-time, and you work from home, we won’t need a nanny either. That will save money, won’t it?” David managed to smile, hugging Sidney closer. If only they had an extension. Where were they going to put a crib? No toys for this little one either.

Samantha was a darling little girl and David loved her. Fortunately, toddlers didn’t seem to feel the cold so she sat and watched as David and Sidney worked frantically to bring in the harvest before autumn stopped their efforts again. Samantha had been a demanding baby but was much happier as a toddler. Manoeuvring around the tiny cottage proved awkward and David sighed with relief as Samantha grew up. The amount of snowfall expected each winter would have seen little Samantha buried in snow.

The paycheck came in at the same time. David and Sidney had their own bedroom, the dining area moved into a proper kitchen area. “When we reach our goal, let’s get a cooker,” David smiled at Sidney over his bowl of canned soup. “Won’t it be lovely to have proper home-cooked dinners?” Sidney smiled at him and hugged Samantha.

“It’s a lot easier with a schoolchild,” Sidney said, “and I can’t believe how quickly she grew up.” Samantha was busy painting and David groaned softly. It was a lovely hobby, but costly. It would be a while before Samantha’s paintings would be good enough to allow for the extra payments. “Reading would have a much cheaper hobby,” Sidney said when she saw David looking at their gorgeous daughter. “Although soon she will be helping with the harvest or maybe even with an after school job.”

David smiled and kissed Sidney on his way to the brand new desk with computer. Books didn’t write themselves and he was determined to get on with his career. Extensions didn’t build themselves either and although Sidney’s career was going well, that could all change if ever there was another baby on the way. He had seen Sidney smiling at Samantha and even David himself felt something tugging at him whenever he heard his daughter sing or laugh.