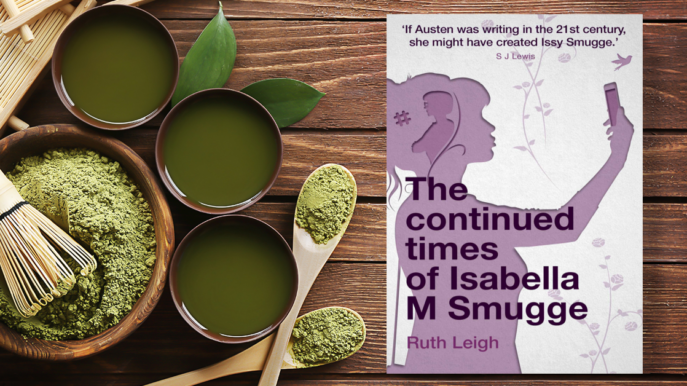 As I was rattling along the gorgeous Cotswolds roads, rainbow ahead in the sky, on my way to do a food pickup at Greggs in between picking up one child from college and feeding all of us, I felt very #IssySmuggeStyle. I was wondering what to put in my review. The Mummy? Nope, not that bit, that would be a spoiler. Johnny and his gift? Nope, spoiler alert as well.

Ruth Leigh, the author, has done it again in The Continued Times of Isabella M Smugge. Another wonderful episode in Issy’s life. Whereas book one, The Diary of Isabella M Smugge was simply hilarious, with Issy being so out of touch making it funny, this time it is more Issy’s character that makes the book a wonderful, hilarious read. Book two already saw changes in Issy, but she is growing in character even more.

The Continued Times of Isabella M Smugge sees Issy as a single mum, looking after her mother as well. Her mother, difficult at the best of times, is recovering from a stroke. All the main characters reappear, like Issy’s frenemy, Liane, who is a carer and ends up helping Issy’s mum. How will that go down, you wonder. Well, no spoilers, so I’m not telling.

Claire is there, although more in the background this time, and I loved Issy’s character changing as she reaches out to her friends and family, trying to do her best, even wondering about telling white lies and learning more about prayer. I love how Ruth brings in so many issues and questions, touching on various topics like counselling and music.

I love how Issy still has all the glamour in The Continued Times of Isabella M Smugge but is more real as well. The book is a lot about forgiveness, kindness and reconciliation. No longer is Issy a hilarious snob who clearly hasn’t figured out how life works, but she is becoming a real friend, although she still has her expensive taste, as she should. Mimi is there to keep her busy, springing some surprises as well, which has Issy’s mother thrilled. #nospoilers #Ipromise

A lot is going on in The Continued Times, and some of the standard characters were only briefly mentioned, making me hope there will be a fourth one to answer all our questions… The book simply didn’t feel long enough, it’s so much fun spending time looking over Issy’s shoulder, cringing as she puts her foot in it again, cheering her on as she gets things right. And then suddenly, the last page! As soon as you put the book down, you miss Issy and her friends, and you wonder, “What are they doing now?” Ruth manages to make them come to life and draw you in, so you feel like you know those people, and then they are gone.

I received a review copy from Ruth Leigh but was under no pressure or obligation to write a favourable review.