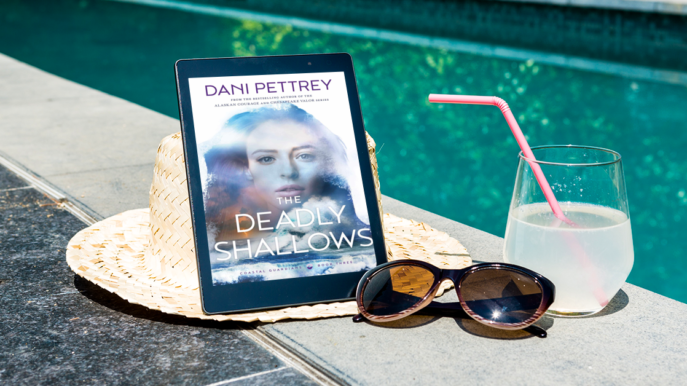 The Deadly Shallows is book 3 in this series, and although I have read book 1, not having read book 2 didn’t stop me from having an amazing time with book 3! I was so looking forward to this book, having read and reviewed book 1 here, and I was definitely not disappointed. I couldn’t put it down and just wished I had book 2 and wondering if and when there is a book 4!

The Deadly Shallows has several main characters, two couples basically and a whole load of danger. So here is the blurb:

A mass shooting. A stolen weapon capable of immense destruction. A painful secret that threatens to tear two hearts apart.

CGIS Agent Noah Rowley is rocked to the core when he learns of a mass shooting raging on his Coast Guard base. He and his team stop the attack, but not before numerous innocent lives are lost. Furious and grief-stricken, he determines to do whatever is needed to bring the mastermind behind the attack to justice.

Coast Guard flight medic Brooke Kesler evacuates the scene of the shooting in a helicopter carrying the only surviving gunman. Gravely wounded, the man whispers mysterious information to Brooke that immediately paints a target on her back.

As Brooke and Noah race to uncover answers, emotions between them ignite. Noah struggles to protect Brooke at all costs and to conceal the secret that prevents him from becoming what he longs to be–the right man for her.

Everything is at stake as a horrifying truth emerges. . . .

The mass shooting wasn’t the end game. It was only the beginning.

The Deadly Shallows is another brilliant book from one of my favourite authors. Brooke, one of the main characters is a wonderful woman and I felt for Noah. Noah has his hands full with this case which was a lot more complex than I thought it was going to be. The shooters had a reason for attacking the Coast Guards Base, but why did they attack and who else is involved?

Dani Pettrey, the author, has done a great job in bringing different clues, perpetrators and problems together into one exciting story. Not only are there the various CGIS agents and their other halves, but there are other victims as well as felons to consider. The Deadly Shallows involves a lot of names but the way Dani has written the story makes it just fine. I was worried I wouldn’t be able to keep people apart, but it really wasn’t a problem.

Brooke and Noah aren’t the only two people growing closer during the hard time, and there is Caleb and Austin’s story as well, which to me seemed unusual as there is normally one couple per book, but I loved this as it can get a bit intense if there is just one couple working through their issues together. This makes it less predictable and more interesting.

The Deadly Shallows has less of the local area description and is more focused on the characters, which I enjoyed. There is one beautiful scene though, early in the morning, which was so well written and vivid, that it made it easy to imagine. The book is action-packed and fast-paced but has plenty of time to show the characters’ hearts as well. I loved Brooke’s faith and how Dani showed how Brooke kept her heart on an even keel through all the turmoil. That was helpful as well as lovely to read.

I received a review copy via Love Books Tours but was under no pressure or obligation to write a favourable review.