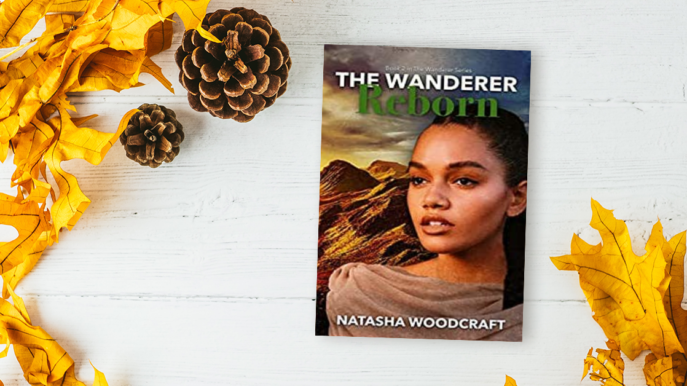 The Wanderer Reborn is the second book based on the first few chapters of the Bible. A short while ago, I wrote about the first book, The Wanderer Scorned. Book two is about to come out, and such an amazing read as well! I have been looking forward to part two of Kayim’s story, and The Wanderer Reborn takes us right back into Lamech’s Hall and the party. The story picks up again…

Natasha Woodcraft, the author, has written a beautifully haunting sequel to The Wander Scorned. It all ended with so much grief and horror, but the story didn’t end there. The Wander Reborn is told through Awan, Havel’s twin sister. Her grief is so great and heartbreaking. How will she ever forgive her brother for killing her twin?

The Wanderer Reborn starts back at the murder scene and Awan’s grief. Natasha draws us in, and you feel for Awan, and Kayim, well… How would she ever face him again? It was good to meet the same characters again and to see their story unfold.

Awan and Kayim meet again, and I just loved Awan’s character. Her love for Jahweh shines through and her faith grows in such a way that you feel challenged. Would I be able to say…? She meets obstacles and temptations, but her faith is so precious. I loved reading about her relationship with her mother and the spiritual guidance Adam and Eve were giving their children, having learned so much from the events. As a family they have to overcome sadness and death and it’s shaping their hearts and minds, and ours at the same time.

Awan’s character comes through in her sons as well. Just like The Wanderer Scorned, The Wanderer Reborn contains lots of hymns and songs, and Awan’s heart comes through so well in these. I love how she sings and prays in her heart at the same time, bringing comfort and grace to her family.

The Wanderer Reborn shows more of the growing knowledge about animals and cultivating the earth, which was interesting. There is an encounter with a large catlike animal, and Awan’s life is in danger several times throughout the book. There are dangers unknown and learning about the world is not easy.

The Wanderer Reborn might not be a Christmas book or even an Advent story, but you know what? It’s full of hope and expectation, a trust that Jahweh will make everything right again one day. Awan’s trust, relying on God to save them and there is a point nearer the end of the book, the main characters talk about God’s love for His people, and His desire to be with them. For me, it’s mainly the songs that show God’s character as Redeemer that make it a book full of longing for the Messiah to come and save us.

The Wanderer Reborn deals with many questions of faith. What is sin, and what is sacrifice? Kayim’s sacrifice went wrong and it’s one of the steps closer to the first murder. I love how Natasha dealt with Kayim and his growth as a person. Just as she showed that the murder wasn’t a standalone event, but that it took time for Kayim to go there, so she takes time again with the aftermath of that horrendous act.

Natasha brings out the different characters and shows their relationship to each other and towards God. She shows how their relationship with Jahweh directly influences the way they are to those around them as well as the animals. It’s sometimes subtle, and life isn’t black and white, but still, the difference is there.

As I said, The Wanderer Reborn will be out very soon and Natasha’s YouTube channel has many of the songs for you to listen to, making the book even more special.

I know it’s not really an Advent book, however, my Advent Giveaway is still open till Wednesday evening. New subscribers to my newsletter have a chance to win Sarah Tummey’s Advent book, Christmas: God’s Promise Kept. Such an apt book as well, as The Wanderer Reborn shows in so many ways!