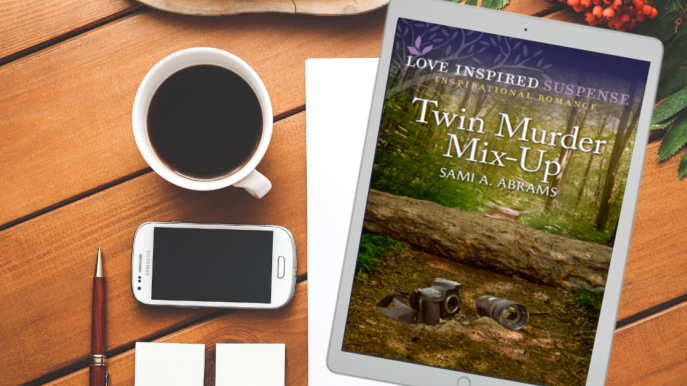 Twin Murder Mix-Up is another book in the Love Inspired Suspense series. Did I tell you already how much I love the series? Enough gooeyness to make you smile, enough danger to make it a wonderful read. Twin Murder Mix-Up has all that and more, as it’s got twins involved as well.

Sami A.Abrams, the author, has done a wonderful job with this story. It is the second one in a series, but the backstory becomes clear enough to make it a standalone read. You will want to read the other story, of course. Amy and Keith, the main characters, are old friends, but something has changed between them. Amy ends up running for her life, with her twin sister’s baby.

Twin Murder Mix-Up starts right into the action with Amy running for her life once more, and having nobody to turn to, she turns to Keith, her old friend. Keith hasn’t responded to her messages or answered her calls, but she hopes he will help her this time. Twin Murder Mix-Up has you sympathise with Amy, and frown at Keith. Until you hear his side of the story, and you realise it wasn’t just the murder that was mixed up…

Twin Murder Mix-Up is the story of messy pasts and uncertain futures. Faith is woven in beautifully but is quite subtle. Keith knows God has forgiven him, but will Amy? And simply saying the words might not be enough either. Sami brings out the shock Keith receives well, spending time on his emotions as he realises he is a father.

Twin Murder Mix-Up has a wonderful ending, like all the Love Inspired Suspense books, but I still held my breath!

I received a review copy via Celebrate Lit but was under no pressure or obligation to write a favourable review.

As it’s a Celebrate Lit Tour, there is a giveaway, US only.

To celebrate her tour, Sami is giving away the grand prize package of a $25 Amazon card and signed copy of Twin Murder Mix-Up (US only) or eBook for outside the US!!

Through the Fire Blogs, August 30

For Him and My Family, September 1

She Lives To Read, September 2

For the Love of Literature, September 4

Lights in a Dark World, September 4

Because I said so — and other adventures in Parenting, September 6

Labor Not in Vain, September 9